Steve Randy Waldman‏ of interfluidity called this thread: Thread, counterintuitive and disheartening. (Here is Aaron Carroll saying that Medicaid access may not have increase opioid deaths and of course that Medicaid expansion may still net out positive.)

It could for a number of reasons be that the current western healthcare (beyond the basics that you do not need insurance to get) is not good for those at the low end of diligence, IQ, conscientiousness scales.

Here are some possible reasons why: 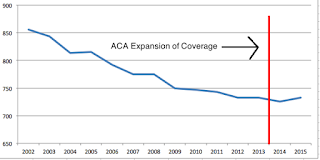 And BTW  on the opioid epidemic being deaths of despair:

New Hampshire has the second highest opiate death rate in the US.  Very good economy in NH. These epidemics come and go look more like viruses than anything caused by despair.
So why would West Virginia be the leader in overdose deaths, because it has been loosing its best and brightest for a long time leaving a higher percent on the lower end of diligence, IQ, conscientiousness scales, the most susceptible.

Here is another thing I just came across on 11/30/2018, length of life is down for the third year in a row in 2018 just a few years after the final provisions of the PPACA (Obamacare) were enacted.


And there is this:


The effect of requiring consumers to obtain prescriptions for pharmaceuticals on mortality is examined for a sample of middle‐income countries. In countries enforcing the requirement, infectious disease mortality is no lower and poisoning mortality is higher than in those not enforcing the requirement. A broader measure of government intervention—public expenditures on health relative to GDP—is shown to have moderately adverse effects on overall life expectancy.


A broader measure of government intervention—public expenditures on health relative to GDP—is shown to have moderately adverse effects on overall life expectancy.


The Amish and themarginal value of health care
Ironic Health Links
Hanson on Health
Wealth and retirement might not be good for everyone!
Has Medicaid Made the Opioid Epidemic Worse?

This is related in that it's one reason that free Government health insurance might be bad for some people. Some people might be working longer because they want to maintain health insurance: Early Retirement May Be The Kiss Of Death, Study Finds

Why I am Against the Minimum Wage

So here is why I'm against the minimum wage:
And yes, I would get rid of it all together and leave it to individuals, unions to work out wages.

BTW statistics and be tricky and when you read economic studies, you need to think about what could have gone wrong on the study and how they could be biased, but statistics are much better than stories (anecdotes). Statistics and theory are the best we have. The old saw "There are three kinds of lies: lies, damned lies, and statistics." has truth to it but again statistics are better than the alternatives.
Posted by JWO at 7:02 AM 2 comments:

Playing off Arnold Kling's Clarifying his Null Hypotheses on Schooling

Here is Arnold answering: The null hypothesis: do I really believe it?

My null hypothesis says that spending more (inflation adjusted) on schooling than was spent in 1960 (that's about 1/3 of what is spent today) has no positive effect on measured student academic outcomes.

Also that only a tiny fraction (perhaps .1%) of schools are good or bad schools. The rest are judged good or bad because they have good or bad students. So parents should relax and only try to avoid the worst .1% of schools and not pay more for a home in a “good” school district.

My mother has told me that her parents went to school for just 1 year, yet they where educated. They were not superstitious as many where in their era. They could read and write and do arithmetic. They read books. They owned and ran a barber shop they speculated on real-estate (but lost most but not all of it in the great depression) and sent their son to Brown University. School is not only place people learn.

Perhaps 3 years of formal schooling would be enough for most people. Nevertheless in the modern world we'd need something for them to do so maybe keeping most in school to 16 is a good idea, not so much for education but to keep them out of trouble. The Amish drop out early and do OK.

For a modern example, the guy who invented this car claims to have dropped out of school at 14 years old.

Also, if we cannot teach children more and it looks like we cannot, we should focus on teaching the most valuable stuff.
Posted by JWO at 1:08 PM No comments:

This plan from the Niskanen center: Universal Catastrophic Coverage — Or How the Senate Can Fix the AHCA

Is similar to my compromise proposal.

I think that they are a little to people with above average income but I like it otherwise. They say it would be cheaper than the ACA. So why are we stuck with the ACA and AHCA?
Posted by JWO at 9:53 AM No comments: